The Wahhabi Tree : Part 2 : THE ROOTS 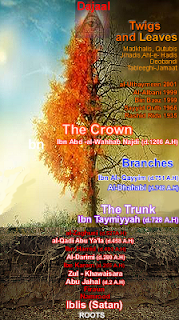 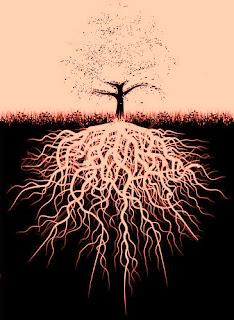 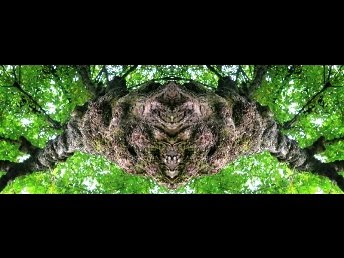 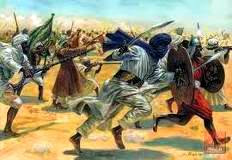 Hazrat Moaz (RA) and Hazrat Moawwaz (RA)
(Amr bin Al-Mu ^ adh Jamuh, 14 years and Muawwiz bin Afra was 13 years old.)
are seen as the Heroes of the battle because they had slayed Abu Jahl. 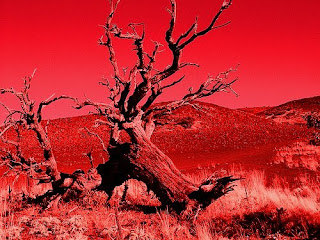 Ibn Mas‘ud then cut off his head and took it to the Messenger of Allâh [صلى الله عليه وسلم] who, on seeing it, began to entertain Allâh’s praise:
"Allâh is Great, praise is to Allâh, Who has fulfilled His Promise, assisted His servant and defeated the confederates alone."
He then set out to have a look at the corpse. There he said:
"This is the Pharaoh of this nation."
...
The Stump 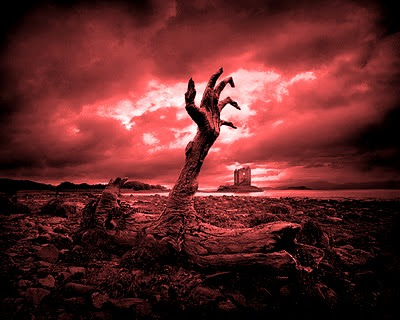 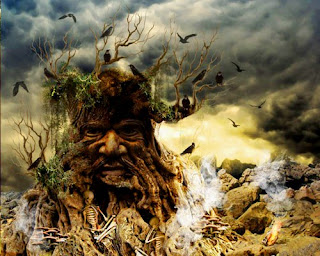 Wahabi Kharijism
dates back to the time of the Holy Prophet (Sallallahu Alaihe-e-Wa-Sallam)
Amongst the clearest indications we have of this is the
Hadith of Hurqus ibn Zuhair in Bukhari and Muslim.

After the Battle of Hunain the Holy Prophet صلى الله عليه وسلم in distributing the booty - gave preference to a number of non-Muslims. His aim was to attract them to Islam.

Hurqus rebuked the Prophet
صلى الله عليه وسلم
by saying to him:
"Be just in your distribution O Messenger of Allah."
The Prophet was incensed by this remark and responded by saying:
"Then who can be called just if I am not just?"
To this the Prophet صلى الله عليه وسلم added:
"There will come a time when a group of people will leave our ranks. They will recite the Quran with fervour and passion1 but its spirit will not go beyond their throats. They will leave our ranks in the manner of an arrow when it shoots from its bow."
It is reported in Mishkat from Hazrat Abu Said Khudri(Radiallhu Anhu) who narrates that:

"Leave him, as his slaying will serve no good purpose, as he is not the only individual but there are a host of others like him and if you compare their prayers and fasting to that of yours, you yourself will feel ashamed. These are the people who will recite the Quran but it will not go beyond their throats, with all these apparent virtues they will leave the fold of Deen just like the arrow leaves the bow." (Miskhat Shareef, PP. 535)
*Also see The Hadith: Shahi Bukhari:
Volumn 004, Book 056, Hadith Number 807
Volumn 008, Book 073, Hadith Number 184
The previous Hadith has also been narrated as follows:
"A person with eyes protruding, with a long beard and head clean-shaven came to the Prophet (صلى الله عليه وسلم) and declared:
" O Muhammad! fear Allah."
The Prophet(صلى الله عليه وسلم) replied:
"If I disobey Allah, then who else will obey Him?
I am obedient to Allah at all times and never disobedient.
Allah has sent me as Amin (Honest for the entire world, but you don't accept me as an honest man?'
A Sahabi (Companion) became infuriated and sought permission to remove him from the presence of the Prophet (صلى الله عليه وسلم). The Prophet (صلى الله عليه وسلم) prevented the Sahabi from doing so After the person had left, the Holy Prophet (Sallal Laahu Alaihi Wasallam) said: "From his progeny will rise a Group who will recite the Holy Quran but it will not go below their throats. They will leave the Deen just as an arrow leaves the bowstring. They will kill the Muslims but spar the idolaters. If I ever confronted these people I would slaughter them just as the people of Aad had been destroyed" (Mishkat Shareef, pp/535)
--
A person among the Companions remarked that they had a better claim to the wealth than these people. When this remark reached the Prophet صلى الله عليه وسلم, He said, “Will you not trust me whom the One above the heavens has trusted?Information comes to me from the heavens morning and evening.”
Then a man with sunken eyes, high check bones, protruding forehead, thick beard and a shaven head, stood up and said,“Muhammad! Fear Allah!” The Prophet صلى الله عليه وسلمturned to him and replied, “Woe be to you, am I not the person who fears Allah Subhanahu Wa Ta'ala the most?” The man than walked away and Khālid ibn al-Walīd(Ra) jumped up and said, “Perhaps one who observes prayer says with his tongue what is not in his heart.”
The Prophetصلى الله عليه وسلم said, “I was not commanded to pierce the hearts of the people or slit open their bellies.”
The Prophet صلى الله عليه وسلم glanced at the man who was walking away and said, “There will arise a people from among the progeny of this man who will recite the Qur'an but it will not go beyond their throats. They will pass through the religion as an arrow passes through its target.”
Khālid ibn al-Walīd(Ra) asked the Prophetصلى الله عليه وسلم, “O Prophet of Allah ﷺ this man has all the [athar] effects of sunnah, his eyes are red due to crying, his face has two scars of tears on his checks, his feet are swollen due to standing the whole night in [tahajjud] night vigil, he has a thick beard…”
The Prophet صلى الله عليه وسلم replied, “The meaning of this Verse [qul in kuntum tuhib'būna allāh fat'tabiunī] say if you love Allah follow me.” He asked, “How O Prophet of Allah ﷺ?' He Prophet صلى الله عليه وسلم replied, 'Be kind like me, be compassionate, love the poor and the destitute, be gentle, care and love your brothers and be protective.’”
--
It is significant that this selfsame Hurqus was elected
as one of the heads of the Kharijites after the
of Siffin!
Also see:
(kitab-ul- Maghazi, Sahih Bukhari,Hadith :4094 and
Sahih Muslim (kitab-ul- Zakaat, Babul Zikhre Khawarij,Hadith: 1064)

Excerpt from `Uthman Ibn Sa`id al-Darimi al-Sajzi's bookal-Naqd `ala al-Jahmiyya p. 75:
"If He so willed, He could have settled on the back of a gnat and it would have carried Him thanks to His power and the favor of His lordship, not to mention the magnificient Throne."
Al-Darimi also said that the person who is on top of a mountain is closer to Allah than the one who is at the bottom of a mountain.
ahl-al-sunna.blogspot.com
Abu Hamid Ibn Marzuq rahimahullah gives the following excerpts from:

`Uthman Ibn Sa`id al-Darimi al-Sajzi's
book
al-Naqd `ala Bishr al-Marisi
--
1. "How can a person be guided towards tawhid [belief in unity of Allahu ta'ala] if he does not know where Allah al-Wahid is?" (p. 4)
2. "al-Hayy [Allah] does what He wills, moves when He so wills, descends and ascends when He wills,... rises and sits, for the difference between the living and the dead is movement. Without doubt, every living thing moves, every dead thing is immobile." (p. 20)
3. "There is a limit for Allahu ta'ala and there is a limit for His makan [place]. He is above the skies, above the Arsh. These are His two limits." (p. 23)
4. "Everbody knows Allah and Allah's makan better than the Jahmiyya." (p. 25)
5. "As I said, if Allah had not had two hands with which He created Adam, it would not be permissible to say "In Thy hand is the good" [3/26, English ma'al from Pickthall] in Qur'an al-Kareem. (p. 29)
6. "The ta'wil of Rasulullah's words "Surely, He is not one-eyed" is that "Allah has two eyes." (p. 48)
7. "Allah sits on the kursi and there remains only four spans vacant." (p. 74)
8. "If Allah so willed, He could have settled on the back of a gnat thanks to His power and Rubbubiyyah, not to mention the magnificient Arsh." (p. 85)
9. "Without any doubt, the top of a mountain is closer to the sky than its bottom. The top of a minaret is also closer to Allah than its bottom." (p. 100)
10. "We don't accept the claim that maf'ulat are absolutely creations. We have agreed that movement, descent, walking, running, istiwa over the Arsh and the sky are qadim." (p. 121)
[Translated from: Bara'a al-Ash`ariyyin Min `Aqa'id al-Mukhalifin (p. 34 in the Turkish edition]
-- 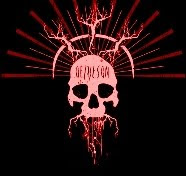 Ibn al-Jawzi took a staunch Ash`ari stance in doctrine and courageously denounced the anthropomorphism of his school in the interpretation of the divine Attributes in his landmark work Daf` Shubah al-Tashbih bi Akuff al-Tanzih ("Rebuttal of the Insinuations of Anthropomorphism at the Hands of Divine Transcendence"),
also known as al-Baz al-Ashhab al-Munqadd `ala Mukhalifi al-Madhhab
("The Flaming Falcon Swooping Down on the Dissenters of the [Hanbali] School") which he began with the words:
Ibn al-Jawzi:
"They held the attributes of God to be subject to human understanding and perception. They heard that God, Glorified and Exalted be He, Created Adam on his image, upon him be blessings and peace. On that basis, They acknowledged for Him an image and a physical form, a face attribute to His essence, two eyes, a mouth, uvulas, molar teeth, and lights for His face which represent His majestic splendor, two hands, fingers, a palm, a little [pinky] finger, a thumb, a chest, a thigh, two shins, and two feet. [They even went so far as saying]:
“We have not heard any mention of the head.” They [then] said: “It is possible for Him to touch and to be touched, and to bring the slave close to His being.” One of them said: “[…] He breathes.” Then they calm the common people by saying. “[These attributes] are not taken as commonly understood.”
Imam, Abul Faraj ibn al-Jawzi:

Ibn al-Jawzi:
“I have seen among the followers of our school some who held unsound discourses on doctrine. Three in particular have applied themselves to write books in which theydistort the Hanbali madhhab:
Abu `Abd Allah ibn Hamid, his friend al-Qadi (Abu Ya`la), and Ibn al-Zaghuni.
I have seen them (Ibn Abi Ya`la, Ibn Hamid, and Ibn al-Zaghuni) descend to the level of popular belief, construing the divine attributes according to the requirements of what the human senses know. They have heard that Allah created Adam according to His/his likeness and form (`ala suratihi), so they affirm that Allah has a form and face in addition to His essence, as well as two eyes, a mouth, an uvula, molar teeth, a physiognomy, two hands, fingers, a palm, a little finger, a thumb, a chest, thighs, two legs, two feet!...
Then they placate the common people by adding:
`But not as we think.'... They have applied outward meanings with regard to the Divine Names and Attributes. Thus, they give the Divine Attributes a wholly innovative and contrived name for which they have no evidence either in the transmitted texts of Qur'an and Sunna or in rational proofs based on reason. They have paid attention neither to texts that steer one away from the apparent sense towards the meanings required for Allah, nor to the necessary cancellation of the external meaning when it attributes to Allah the distinguishing marks of creatures. They are not content to say: "attribute of act" (sifatu fi`l) until they end up saying: "attribute of essence" (sifatu dhat).

Then, once they affirmed them to be "attributes of essence," they claimed: we do not construe the text according to the directives of the Arabic language. Thus they refuse to construe "hand" (yad) as meaning "favor" and "power"; or "coming forth" (maji') and "coming" (ityan) as "mercy" and "favor"; or "shin" (saq) as "tribulation."
Instead they say: We construe them in their customary external senses, and the external sense is what is describable in terms of well-known human characteristics, and a text is only construed literally if the literal sense is feasible.
Then they become offended when imputed with likening Allah to His creation (tashbih) and express scorn at such an attribution to themselves, clamoring: "We are Ahl al-Sunna!" Yet their discourse is clearly couched in terms of tashbih. And some of the masses follow them.

I have advised both the followers and the leaders saying:
Colleagues!
You are adherents and followers of our madhhab.

Your greatest Imam is Ahmad ibn Hanbal
may Allah have mercy on him,
who said while under the lash of the
Inquisition: 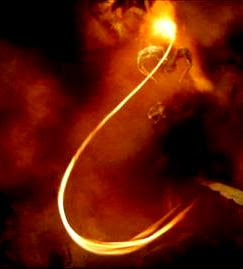 "How can I say what was never said?"
"Beware of innovating in his madhhab
what is not from him!” 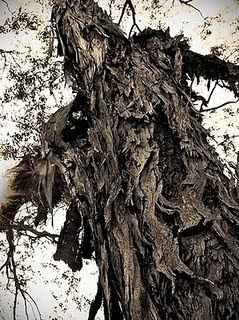